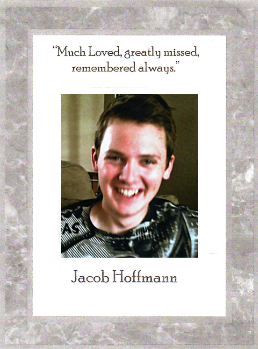 There have been “rumours” why I took my life and I would like to set the record straight. I had a secret. A secret that I couldn’t share out of shame and embarrassment. A secret that caused absolute devastation to my mother, brother and friends. Only a few closest to me knew the details, and the name of the person regarding my secret.

I had been molested by a family member. A man I should have been able to trust. This individual is a pedophile and a predator. A pedophile that needs to be stopped before he hurts and destroys, not only another child like me, but another family.

At the age of (14), I did cut ties with my molester, but by then the damage had been done and I was no longer able to endure the pain, suffering and torment. Despite best efforts made by those who cared for me, personally and professionally, I sought peace through suicide.

This was not my first attempt…but…it was…my last.

The suicide rate among sexually abused boys is very high and tragically, Jake is now counted as part of that statistic. 90% of sexual molestation is from within a family circle.

Donations to Jake’s Fund are used by Dan’s Legacy to provide counselling and life skills for youth who are dealing with pain and chaos resulting from abuse and trauma.

“I knew Jake for more than three years. Even though we worked hard together on overcoming many personal problems that he had endured since childhood, some personal issues overwhelmed him. Although when an issue did get the best of him he would try even harder to find his way out. During some of the darker times he would endure his inner pain like a man even though he was still a a boy at heart. There were days in which he was on top of the world but sadly other days the world seemed to be on top of him. Like most of us when in pain and dealing with the chaos it brings, he began to self-medicate. When he realized where this path would eventually lead he made a great effort to get clean but the past would not let him go. Feeling trapped by his past he fixated on his inner pain thus losing sight of the hope for his future. The love of his mother, brother and friends was not enough, when he could not love himself, and he tragically ended his life just a few weeks short of his nineteenth birthday…Jake will be missed.”
– Tom Littlewood, Program Director