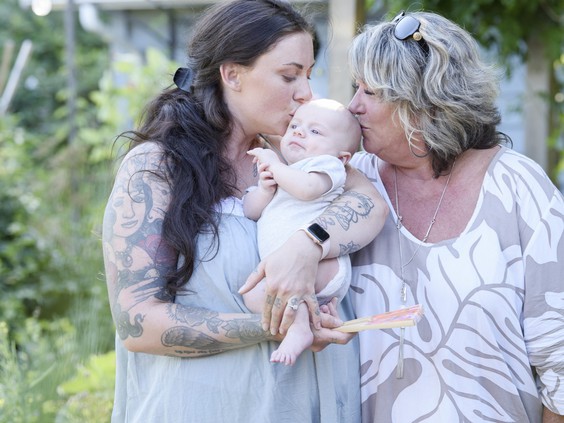 With private and corporate support, including a donation of $58K from TELUS Friendly Future Foundation, the B.C.-based non-profit has been able to weather a pandemic-related surge in demand for critical programming and timely treatment for young people in crisis.“Dan’s Legacy helped me get my life back,” says Sierra Van Straaten, pictured above with her seven-month-old son and her mom, Lorna Van Straaten.

In the darkest moments, crystal meth offered Sierra Van Straaten what felt like escape. The drug’s hold on her sent her into a two-year spiral that saw her slipping in and out of detox, rehab centres, sober living houses and 12-step programs. The lure of being able to temporarily mute the depression she’d dealt with since she was a child had her in a stranglehold. “Nothing worked for me,” Sierra says. Nothing, that is, until a family friend connected her to Dan’s Legacy, a non-profit organization that offers free counseling, wrap-around support and vocational training to at-risk youth in B.C.’s Lower Mainland.

Through Dan’s Legacy, clients are empowered to take charge of their own recovery. “It was literally like a lightbulb went off,” says Sierra’s mom, Lorna Van Straaten. “Over those first few weeks, with the kind of counseling they were doing, all of a sudden Sierra just started to change.” And she hasn’t looked back. Now a mom to a seven-month-old son, in a loving relationship and engaged to her partner, and with a new business that keeps her busy, Sierra credits Dan’s Legacy as the crucial life-changing experience she needed. “Dan’s Legacy helped me get my life back. I feel I can handle anything now.”

Although Dan’s Legacy receives funding from the province, including the Ministry of Mental Health and Addictions, the organization relies on corporate and private donations to ensure they don’t have to turn away any clients in need. Support from TELUS Friendly Future Foundation (TFFF) is a crucial part of the equation, says Dan’s Legacy executive director Barb Coates.

Founded in 2018, TFFF, alongside the 13 TELUS Community Boards, provides millions of dollars to more than 500 local charities across Canada every year. The foundation supports charities that offer health or education programs, many enabled by technology, that help youth thrive in a digital world. Dan’s Legacy has received $58,000 from the foundation – critical funding, especially at a time when the COVID-19 pandemic has caused a surge in overdoses and suicide attempts by at-risk youth in the Lower Mainland. The organization has seen a 50-per-cent increase in referrals as they’ve worked through the crisis.

“The TELUS Friendly Future Foundation is helping us get ahead of the opioid overdose crisis by giving us the support we need to be there right away for these young people when they ask for help,” says Coates. “We see our clients’ potential, and thanks to the TFFF, we’re helping our clients see it too.”

Dan’s Legacy’s counseling programs are trauma-informed, meaning they help the client understand the source of their psychological pain. This insight helps youth discover the power they’ve always had to make positive changes.

“The problems take care of themselves when we’re focused on the solution,” says program director Tom Littlewood. “What they don’t know is what their strengths are.”

“We look at the youth that come to us from a holistic point of view,” adds Coates. That means taking care of basic needs – food, shelter, transit tickets, a weekly hot meal, and clothing, offered through Dan’s Legacy’s wrap-around programs or community partners – before addressing therapy. Stabilization comes before counseling, so young participants can engage in programming instead of focusing on being cold or hungry or not knowing where they’ll be sleeping. To complete that wrap-around support, Dan’s Legacy follows up with work skills training that gets youth employed. And it’s all free, ensuring those in greatest need aren’t missing out.

A survivor of childhood leukemia, Sierra was forced to reckon with the idea of mortality when most girls her age were playing with dolls. She struggled with depression from the age of 11 onward, but excelled in school, graduating a year early at the top of her class. An unexpected break-up after high school sent her into a tailspin. In a new town, recently single, she threw herself into the bar scene, partying, taking drugs, calling in sick every day to her job at a law firm. When Sierra discovered crystal meth, she was able to mute the depression – a feeling she chased at the expense of eating, drinking and sleeping. She lost 80 pounds in two months.

Not knowing what else to do, her parents had her admitted to a rehab facility in Surrey. Within the first month, Sierra was sneaking drugs in. She ended up on the streets, involved with criminals and using drugs. For two years, she was stuck in a loop of treatment and relapse.

“It got ugly really fast. I was just floundering,” says Sierra’s mom, Lorna. “We couldn’t find anything that worked.”

To Sierra, no solution seemed permanent. “I was in crisis and had to come clean to my parents and tell them I was using. I was tired of being unhappy,” she says of the dangerous cycle she felt trapped in.

Trauma during childhood and youth is the experience shared by all of Dan’s Legacy’s clients. Many of the young people with whom the organization works have been through destabilizing foster placements and have been denied many educational and other important growth opportunities. Many people on the streets are kids who have aged out of care or left unsafe homes. Approximately 40 per cent of those involved are Indigenous and one-third are LGBTQ+, according to Littlewood.

While there are numerous detox and recovery programs around the Lower Mainland, relapse rates for most, including 12-step programs, are alarmingly high, says Littlewood. The success rate of Dan’s Legacy is 50 per cent – well above the roughly seven per cent of 12-step programs.

“Dan’s Legacy is something special. It’s miraculous the way my life turned around,” says Sierra. “I’m alive because I found them.”

Dan’s Legacy is one of the many charities to receive funding from the TELUS Friendly Future Foundation. Every year, the foundation provides millions of dollars in grants to more than 500 local charities across Canada, including provincial and national organizations that offer health or education programs, many enabled by technology.

This story was provided by TELUS for commercial purposes.